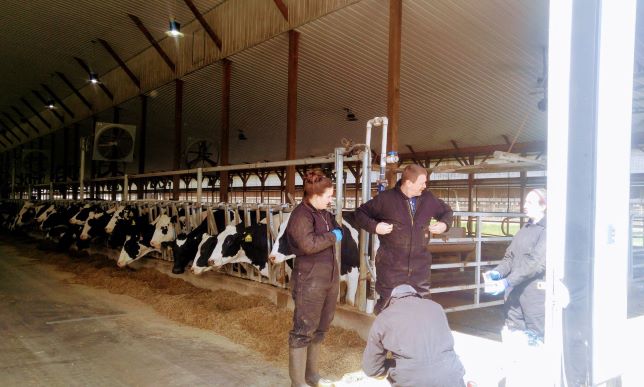 The transition period represents the most critical stage of a dairy cow’s production cycle. The cow undergoes extreme metabolic and physiological changes which increase the risk of production and reproductive failure later-on. There is a growing body of evidence suggesting that increasing availability of dietary omega-3 fatty acids can have a profound impact on mammalian immune and reproductive systems; therefore, omega-3 fatty acids may play an essential role in ensuring long-term productive success within the dairy industry.

Reproductive failure is a predominant reason for culling on North American dairy farms representing nearly 30% of herd culls1 . This represents a significant economic loss within the industry and influences herd sustainability, especially in incidence where reproductive failure occurs during a cow’s first lactation. Omega-3 fatty acids have been suggested to improve reproductive processes in dairy cattle and offer a potential dietary solution to the problem. The commercial feed ingredient known as linPRO-R is rich in these fatty acids and, therefore, may support a well-rounded reproductive management program on-farm.

Researchers at Penn State University -led by Dr. Troy Ott- are conducting a large-scale commercial research project to evaluate the effects of feeding linPRO-R to transition dairy cattle on subsequent reproductive performance. Preliminary results from this research were presented in at the 2019 annual Meeting of the American Dairy Science Association2. The data showed that, even in a high-performing herd, feeding linPRO-R three weeks prior to calving improved 1st service conception rates of primiparous cows by more than 10% when compared to a control group.

“Seeing such a reproductive response in a herd that already had exceptional conception rates was unexpected”, says Ott. “It would be interesting to see what level of response might be attained in a herd experiencing poor or average reproductive success.”

In addition to reproductive failure, chronic inflammation after calving represents another significant source of economic loss on-farm, due to increased risk of involuntary culling and associated reductions in milk production. In particular, mastitis represents the costliest inflammatory disease within the dairy industry, today. Dietary omega-3 fatty acids have been identified as regulating inflammatory immune responses in mammals3; therefore, it was hypothesized that feeding linPRO-R may induce an anti-inflammatory in dairy cattle when fed to transition dairy cattle.

“Our ongoing research is trying to determine if feeding a diet containing omega-3 fatty acids promotes changes in immune function that are beneficial to cow health and whether this contributes to improve reproductive performance and milk production”, says Ott.

The benefits of improving dietary availability of omega-3 fatty acids for dairy cattle continue to unfold through high-caliber research initiatives such as those being conducted by Penn State University. The data generated on linPRO-R- especially data from commercial trials- continue to help producers and their nutritionists formulate practical feeding strategies that will support long-term production and economic success on-farm. 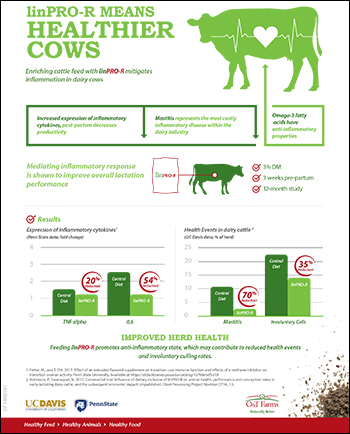 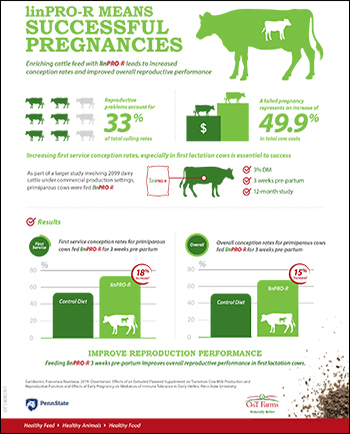